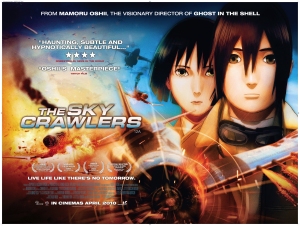 It is hard to write a coherent review of The Sky Crawlers without revealing major plot twists, but I will try. I advise you to see the movie without reading too much about it beforehand so that you can enjoy and think about what happens without bias. Do stick around for the epilogue after the closing credits.

The Sky Crawlers is a thought-provoking alternate history that will appeal to literate science fiction fans. Mainstream audiences will undoubtedly be bored and confused by what happens in the film. The film examines weighty themes such as the meaning of war and the nature of memories. I was reminded of the death of famous amnesiac “HM” while watching The Sky Crawlers, as some of the characters suffer from a similar type of memory loss. Why they suffer this loss is one of the twists that will either spark heated discussion or bewilderment afterward. Like most good science fiction, The Sky Crawlers presents somewhat ambiguous characters and ideas. It is up to the viewer to interpret the meaning.

What worked: The CGI aerial combat sequences were amazing—dizzying and spectacular, with intricately designed air vehicles that spurred the imagination. The characters’ emotional depths were thoroughly mined—although not always pleasantly so. The character design and art direction were top notch—the CGI segments were almost photo-realistic, and the 2D segments were beautifully drawn and lighted, too. The Basset Hound was cute.

What didn’t work: The pacing was slow—this is a psychological drama, not an action adventure—and could have benefited from some judicious editing. Although I found the transitions from CGI to 2D and back to be perfectly fine, particularly after getting into the rhythm of the film, many viewers will likely find the transitions jarring.