I’m back to my blog after a couple of week’s hiatus due to the holidays. I’ve also been preoccupied with an opportunity to extensively try out both Amazon’s Kindle Fire and Barnes & Noble’s Nook Tablet. 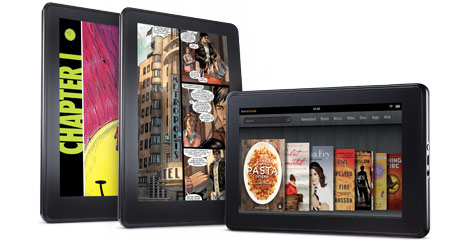 Overall, I like both tablets very much. They are similar in many ways. The screen sizes are identical; however, the case for the Nook is slightly wider, and about ½ inch longer. The excellent screen resolutions and refresh rates seem to be the same. Book reading and web navigation are intuitive and easy using touchscreen technology (which leads to fingerprint-smudged screens that need to be cleaned regularly). They both weigh about 14 ounces, the same as a large paperback book, and are easy to hold for long periods. Video streaming is excellent with both, but the speaker on the Nook is on the back panel, which makes the audio sound terrible (I would use earphones for either tablet, anyway). The Nook battery charges in less time and lasts longer than the Kindle. The Nook has a built-in microphone; the Kindle has no microphone.

Both tablets operate on modified Android systems, but are incompatible with each other or with other Android devices. This means that you have to go through Amazon for Kindle content and Barnes & Noble for Nook content, especially when it comes to apps. You can download books from third-party sites, such as Gutenberg.org, but the results are not always predictable. For example, Gutenberg books will not appear in either device’s Bookshelves, but rather in a more obscure Document folder. However, both Amazon and Barnes & Noble enable you to download Gutenberg and free Google Books through their interfaces that will put the downloaded books into their expected bookshelf locations (however, they don’t indicate where the books are coming from, simply noting that they are public domain publications that have been transcribed by volunteers).

The operating systems are different enough from each other and from other Android devices that you must use Amazon apps with the Kindle and Barnes & Noble apps with the Nook. Here, Amazon seemed to have the advantage. Not only does Amazon appear to have more apps available, but also certainly far more free apps than Barnes & Noble. For example, Amazon has an ad-supported Angry Birds app, while you must pay $2.99 for the Nook version.

The Kindle has 6GB available for user content; the Nook has 13GB. Both tablets rely on the “cloud” to store books, music, videos, etc; the Kindle more so than the Nook. The Nook has a slot for a microSD Memory Card, which is a big advantage, since you don’t always have a wi-fi connection when traveling.

The Kindle Fire is $199; the Nook Tablet is $249. Presumably, the difference is primarily due to the memory difference.

For people who don’t read comic books, I can say that either tablet is excellent. However, for someone like me who reads a lot of comic books, there are some stark differences between the Kindle and the Nook. Probably the biggest difference is which publishers they support. Amazon has an exclusive deal with DC; it’s basically impossible to read DC comics on a Nook. The screen resolutions are such that reading comics on either tablet is doable, but still a bit of a strain to easily read all the text. The Kindle has a free comic-reading app from comiXology that enables you to automatically read comics panel by panel, thus increasing the size. By and large, this app works well, although only for comics purchased through the app (but still ultimately from Amazon). Comics bought directly from Amazon don’t seem to work with the app. The Nook does not seem to have any apps of a similar nature. One big drawback to the comiXology app is that it requires a wi-fi connection even for comics that are stored on your device.

There is another Kindle app called ComiCat that has generally excellent reviews; it costs $2.99, and from the description will read just about any type of digital comic format.

For me, it’s a no-brainer. Kindle’s access to the DC library makes it the only choice for me. I hope that DC and Barnes & Noble can come to an agreement, or that a third-party will develop a universal comic book reader app for the Nook, but until then I will stick with the Kindle Fire.

One response to “Kindle Fire vs. Nook Tablet”