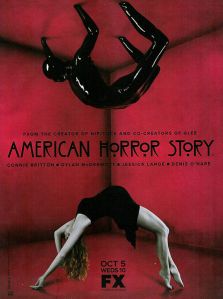 Snapshot: very creepy, but ultimately not very satisfying; it’s hard to see how it can stretch into thirteen episodes, let alone more than one season.

Psychiatrist Ben Harmon (Dylan McDermott) and his wife Vivien (Connie Britton) are suffering severe marital strife, so they decide to try to start over by moving from Boston to Los Angeles. What caused the strife? Vivien had a miscarriage at 7 months, and soon thereafter caught Ben having sex with one of his students. My first thought upon learning this back-story somewhere near the end of the episode was, wow, they must love each other an awful lot to stay together under those circumstances. But love was really nowhere in sight. Lust, yes, but love, no.

Complicating their lives is their teenage daughter, Violet (Taissa Farmiga) who is reacting to this turmoil by cutting herself and contemplating suicide.

Then the real horror begins.

The stately Victorian house they buy turns out to make the Amityville house look like the Cleaver household. Beginning as far back as 1978, possibly earlier, the house has been host to at least seven murders, all under very mysterious circumstances.

Then there’s the creepy next-door neighbor Constance (Jessica Lange) and her Down syndrome daughter Adelaide (Jamie Brewer) who keeps telling everyone they’re going to die.

Vivien hires the previous owners’ housekeeper (Frances Conroy), a nice matronly woman. The only problem is that Ben sees her as a hot young seductress (Alex Breckenridge).

Ben’s first patient, who he sees in his home office, is a troubled teenager named Tate (Evan Peters) who immediately confides that he is planning a massacre at his high school. Luckily for Tate, Ben isn’t a very good psychiatrist and doesn’t notify the authorities. Tate strikes up a friendship with Violet, and together they stage an elaborate ruse to scare school bully Leah (Shelby Young) into leaving Violet alone. However, the ruse turns weird when Tate seemingly turns into a monster that tries to rip Leah’s face off.

Last, but not least, Ben is visited by Larry Harvey (Denis O’Hare), one of the previous owners who murdered his wife and children by setting them on fire, and has third-degree burn scars over 70% of his body. Larry warns Ben about the malevolence in the house, but of course Ben completely discounts what he says.

In the process of introducing these characters we are subjected to many haunted house staples: creepy hand-held camera shots, body parts in jars, evil twins, a dark basement, a dusty attic filled with weird stuff, dead animals, strident music (I’m sure I heard Bernard Hermann cues from Kill Bill (2003) and Vertigo (1958)), and lots and lots of bad decisions. We are also subjected to lots and lots of butt shots of Ben sleepwalking through the house, and a spirit dressed in S&M gear who rapes Vivien (she thinks it’s Ben).

Series creators Ryan Murphy and Brad Falchuk have given us both Nip/Tuck and Glee. American Horror Story is no Glee, that’s for sure. They seem to think that by being on FX they can and should have as much sex and violence as possible, but they forget that sympathetic characters ground true suspense, and so far the Harmons are not at all sympathetic. Take Stanley Kubrick’s The Shining (1980) as an example of a very similar situation. Jack Torrance (Jack Nicholson) was a caring family man who got caught up by his paranoia and fear. Ben Harmon is just a self-absorbed jerk who really just wants to have sex with his wife after a year of abstinence, and so ignores all the warning signals. Vivien is cold-hearted and weak-willed. Violet is an uncaring brat. And none of them talk to each other about the odd things that are going on.

Or look at Twin Peaks (1990), filled with quirky characters you cared about, fighting a supernatural menace that took the guise of a loving father, enabling a gradual buildup of suspense. Monsters in the basement glimpsed by strobe lights evoke a primitive fear that ultimately cannot be sustained.

The most interesting character by far is Constance, due in large part to Lange’s unnerving portrayal, and to the absence of a clear motive. The best line of the night was when Constance turned to the maid and said, “don’t make me kill you again.” What the what?

American Horror Story has potential. The pilot was packed with enough action, plot points, and characters to fill a feature film. How they can maintain that pace for thirteen episodes will be a challenge. I think the trick will be to create some truly unpredictable plot twists, because for now it seems that almost every character the Harmons encounter is or could be a ghost, and that wouldn’t be too fun if it’s true. According to imdb.com, Zachary Quinto will be appearing in future episodes, so that could spice things up.

The acting and production values are there, but I don’t know if the audience will give the series the time to develop.