In 1988, Nolacon II created a one-time special category, “Other Forms,” as a way to honor the graphic novel Watchmen by Alan Moore and Dave Gibbons. In subsequent years fans discussed whether there should be a permanent graphic novel category, but nothing happened until 2008. That year the organizers of Anticipation agreed to include a one-time, special Best Graphic Story category in 2009 in expectation that the 2009 Business Meeting would ratify Best Graphic Story as an official category. This did indeed happen, and thus, Best Graphic Story became a permanent award in 2010. However, it has a sunset clause that requires it to be ratified again by the 2012 Business Meeting in order to continue. This kind of sunset clause is often included for new Hugo Award categories as a way to easily get rid of categories that turn out to not have broad support.

Best Graphic Story Nominations (287 ballots cast)
(The titles in bold are the ones I nominated.)

It is clear that Hugo readers are not avid comic book readers. There is little overlap of the Hugo nominees and any of the comics-related best-of lists and awards. The Hugo voters are going for fanish titles such as Girl Genius and Schlock Mercenary, along with obscure titles by fan-favorite writers such as Paul Cornell and Joss Whedon (in previous years), and ignoring outstanding mainstream titles such as The Walking Dead, Locke & Key, Chew, 20th Century Boys, Return of the Dapper Men, and Irredeemable, to name a few. Yes, Y: The Last Man, Fables, and The Unwritten have been nominated, but there’s so much more good stuff not being recognized.

One of the troubles with this category is that much of what’s published is in a highly serialized form, with storylines often extending over several years. Publishers typically gather six to ten issues into trade editions, and these are what get nominated. But in reality, these volumes don’t often represent entire, self-contained stories. How can one justify recognizing an incomplete story?

The comics world is producing more top-notch work than in any other Hugo category, yet only seven works made the 5% cutoff this year. Moreover, the Hugo voters have given the award to Girl Genius three years in a row. To his credit, Phil Foglio announced that he would not accept a nomination next year for Girl Genius. It remains to be seen whether this will be enough to convince next year’s Business Meeting to permanently ratify the Best Graphic Story category. As much of a comics fan as I am, if there is no greater diversity of nominees, I may have to support ending the category. Although the Hugo Award is a popularity contest, it should ideally represent a broad representation of the best of science fiction and fantasy.

Fables: Witches, written by Bill Willingham; illustrated by Mark Buckingham (Vertigo)
The continuing adventures of the intermingled fables are chronicled. Well written and fabulously drawn, this volume heightens the tension left over from the previous volume. This is by no means a stand-alone story; readers are strongly advised to review the previous volumes to fully grasp the nuances of the plot and characters. 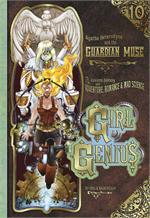 Girl Genius, Volume 10: Agatha Heterodyne and the Guardian Muse, written by Phil and Kaja Foglio; art by Phil Foglio; colors by Cheyenne Wright (Airship Entertainment)
A beautifully drawn, whimsical, steampunk adventure of plucky heroine Agatha Heterodyne, who is trapped in the damaged machine that is Castle Heterodyne, fighting a variety of menaces. Frenetic and rambling, with many characters to keep track of (some of whom have multiple personalities), this does not work as a stand-alone story.

Grandville Mon Amour, by Bryan Talbot (Dark Horse)
Detective Inspector LeBrock, late of Scotland Yard, trails a psychotic killer to Paris, where his own haunted past comes back to confound him. An alternate history (in which France won the Napoleonic Wars) using anthropomorphic characters and a steampunk sensibility, this is a highly enjoyable, self-contained thriller that has masterfully artwork.

Schlock Mercenary: Massively Parallel, written and illustrated by Howard Tayler; colors by Howard Tayler and Travis Walton (Hypernode)
Schlock Mercenary, a lightweight space opera gag strip, may be fun, and occasionally mildly amusing, but how can it compare to truly outstanding graphic novels? Or perhaps I am missing something, as it was the top vote getter among the nominators, and at a panel at Renovation I heard one notable author cite Schlock Mercenary as one of the best science fiction stories in any format.

The Unwritten, Volume 2: Inside Man, written by Mike Carey; illustrated by Peter Gross (Vertigo)
Tommy Taylor is a literary boy wizard not unlike Harry Potter. Tom Taylor is the real-life son of Tommy Taylor’s creator. When Tom’s father goes missing, Tom and his companions are pulled into a fantastic mystery full of intrigue and suspense. This volume stands pretty well on its own, but for maximum comprehension, one should read Volume 1 first.